Are these two electronic musicians really from the future . . .

There are varied reports as to the authenticity of this claim so for the moment we’ll stick to what we can document in “real time”.  The Raveolution is a two part audio experiment consisting of two long time friends KC and Skyko.  Their documented working relationship began in a West LA rehearsal space decades before the phrase EDM had been coined.

Becoming friends was easy. They were both transplants to the Los Angeles fabric, KC from Chicago and Skyko from Pennsylvania, the two played music together for a short while but soon headed down separate musical paths – each with varying degrees of progress, but with a mutual determination to succeed.  Over the years they remained friends and as fate would have it both found similar world travels.  Skyko explains, “One day KC came by my studio in Santa Monica and we compared stories of how we both spent extended periods in London and how that effected our music.  KC hung out with the Chemical Brothers during those early years and I don’t see how that could not have a profound effect on someone!”

Skyko paralleled this urge to bring live performance into the nightclub by incorporating synthesizers, singing, electric violin and live drumming with his computer and drum machines. These early live electronic performances at Steve Castro and TJ Hoban’s nights at the Key Club, Clubcrasher, House Of Blues, God’s Kitchen and Afterhour Power gave him the valuable insight into what will work in the dance club environment.  One of the highlights of that era was writing dance music for the entire 45 minute production of “V” at “The Joint” in the Hard Rock Hotel in Las Vegas back in ’97.  Skyko’s main focus during the years 94-2000 was mastering the art of dance music production in the recording studio though.  In 2000 he relocated to Japan for three years and began to DJ.  In 2004 he and a few other dance affectionados opened “Trance Club Heaven” in Hollywood, CA.

“It wasn’t until a chance meeting in 2010 that we decided to write some music together again”, KC relates, “We both amassed some mad face time onstage and by combining our strengths we feel deep down that we are onto something tremendously groundbreaking.”  Skyko agrees, “I think that we were both tired of doing the solo thing, lugging gear around by ourselves and “spinning plates” as I like to say.  Having someone to bounce ideas and opinions off of really does have a powerful impact.”

These two seem like relatively nice chaps, but when they asked me to close with this quote – it did make me wonder about previous rumors of their mortality.  I promised I would include it though, so here it is . . .

“Come! Oh traveler of the earth! Join us in our mission to save the world from the coming corporate acquisition. Join us in our independent spirit to rise in the moment, mobilize with our counterparts – have confidence in our own minds and soar free.  Join us! Become us! Unite in The Raveolution!” 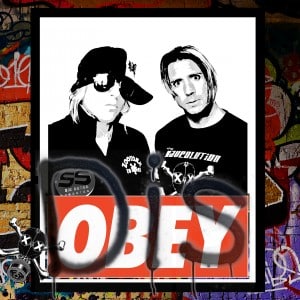